We have for you this year:

All percentages have been rounded to 4 decimal places for your bargain-hunting convenience!

Also note that the HamStudy.org mobile app will be on sale for $1.99 (50% off) for the same duration! All sales at signalstuff.com support hamstudy.org development and related projects.

For those of you who have participated in previous years sales, you may not know that these are different (better!) antennas than we have sold in previous years; the wire thickness on our dual band model has been increased by 36% but the flexibility remains! Buy one today! (or, well, during the sale, we suppose)

You know you want one. All the cool hams have one.

All antenna sales support development and advertising of HamStudy.org and related products. Order one here.

All antenna sales support development and advertising of HamStudy.org and related products. Order one here.

In honor of this day we are offering free shipping on all orders to anywhere from today (April 18) through Friday, April 21, 2017.

Free shipping valid for both T-Shirts and Antennas.

Update 4/19/2017: It has come to our attention that the free shipping was not correctly configured on the online store — those who placed orders anyway have been refunded the shipping cost and we sincerely apologize to anyone who was affected. The problem should be corrected now.

BNC connectors are common on older radios, often referred to as “bricks”.  They are also found on some newer radios such as the Icom V80. They are a larger connector, but due to the handy “twist and lock” mechanism they are very quick to put on and take off. Some people get adapters for their other radios so that all their radios can use BNC, primarily so that they can easily change between the connector types.

SMA (and how to determine polarity)

Before going over the specifics of SMA-F and SMA-M, note that the polarity is determined by the pin — the connector with a pin is male, the one with a socket is female. This causes a lot of confusion with people who figure the one with threads on the outside would be male, but that one has a socket and is SMA-Female.

SMA-Female connectors were very rarely seen on antennas until the last few years (2014 or so) when many Chinese manufacturers began manufacturing inexpensive radios capable of operating on amateur radio frequencies.  There are a lot of debates as to how good those radios are but most of them require antennas with an SMA-Female connector. There are also some Motorola and Kenwood radios that we know of which require SMA-F antennas, and there may be others that we are unaware of.

It is worth noting that this is *not* the same connector as a Reverse Polarity SMA, often abbreviated RP-SMA; that has the pin and socket switched from standard and will not fit your radio.  We’ve often seen these called “Reverse SMA” which is semi-accurate since historically most ham radios with an SMA antenna required SMA-Male on the antenna, but it is far too easily confused with RP-SMA and we recommend strongly against using the terminology.

A radio with an SMA-Male connector on it requires a SMA-Female antenna.

SMA-Male connectors are needed by most radios produced by the more “traditional” Amateur Radio manufacturers; nearly all Icom and Yaesu handhelds require an antenna with a SMA-Male connector on it, as do many other brands.

A radio with an SMA-Female connector on it requires a SMA-Male antenna.

Probably the question I get asked most is “what kind of gain do the signal sticks have”, and “why don’t you list gain on the site?”  I have answered many people individually, but it comes up often enough that I figured I should probably write up an explanation.

First and foremost, the reason I don’t list the gain of the antenna is that I don’t like to lie to people. I consider it dishonest to give a number which can’t be proven in actual use. Here is the problem with “gain”: gain is a relative term. Literally.  Gain is defined as “increase the amount or rate of (something, typically weight or speed)” — in this case, it would be an increase in output, signal strength, etc.  Here is the issue, though: it has to be relative to something.

When you transmit, you put out a certain amount of power — if it’s a handheld, that might be 5 watts.  If you have an “ideal antenna” then those 5 watts will go out from the radio and nothing will be reflected back to the radio (in a simplified way, this is what SWR is: how much power was radiated vs reflected). However, if you had a theoretically ideal antenna you could have another theoretically ideal antenna which outperformed it in certain cases.  This is because there are actually two things to worry about: 1) the power of the radiated signal, and 2) the direction of the radiated signal.

Some antennas will tell you that they are 3dB gain — this means they will have twice the signal strength of some other antenna. If you see 3dB then you should find out what that is in relationship to.  I can confidently tell you that you should get *at least* 15dB gain using my antennas…. compared to using a dummy load.

Finally, a “rubber duck” antenna is able to be short because it makes up for it’s short length by adding a “load” to the antenna — typically a coil at the base which loses some energy to heat in exchange for making the rest of the antenna resonant at the frequency you need.  It also changes the radiation pattern, though; in general, only a very very poorly designed “whip” antenna would fail to outperform the rubber duck, but remember that radiation pattern!  In some odd cases I’ve seen it happen, and in a car when the “whip” might have to be bent over the duck will likely work better.

So stop yakking and answer the question already!

Anyway, the long and the short of it is that it’s impossible to tell for sure what the “gain” of an antenna is without doing a lot of careful measurement under different circumstances with very expensive equipment — equipment that I don’t have.  I can’t calculate the “gain” relative to your stock “rubber duck” antenna because I don’t know the exact characteristics of that antenna.  Added to this is the fact that a typical handheld antenna is actually just half of a dipole, and it doesn’t tend to hold still or remain constant relative to things near by that might affect the performance of the antenna — things like cars, houses, trees, fences, other people, your arm, etc.

The dirty truth is that even SWR readings on a handheld antenna may vary as much as 1:1-5:1 depending on what is near, where the handheld sits, how the antenna is mounted, and any number of other factors.  (Yes, I’ve measured that). When companies say that their handheld antenna gets 1.5:1 VSWR they are telling you that they managed to find some setup where they could measure that, not that you should actually expect that performance.  In my experience, most handheld antennas are actually operating at more like 3:1.

Our antennas work very well — they should work *a lot* better than the stock antenna on your handheld.  If we trust gain figures from other similar commercial antennas we might guess that these are approximately 2dB on 2m, probably 2dB to 3dB compared to an isotropic antenna on 70cm.  We could further deduce that these should be about +6dB compared to “typical stock HT antennas”… and just think, with that and $5 you can get a happy meal at McDonalds!

The one thing to note is that some other antennas have a matching section in the base that turns the 70cm function of the antenna into a 5/8 wave. Signal Sticks are 3/4 wave on 70cm, which will tend to only be a little better than a really well made rubber duck.

I hope that answers some questions!

One challenge with a project like these antennas is that we are constantly looking for ways to improve on our previous designs. The reason this is a challenge is that often when we develop an improvement which has significant advantages it also changes the appearance of the antenna, which both creates the possibility that people will not like the change and creates a transitory period where people expect the product to remain constant but we have some stock of the old and some of the new.

That said, we’ve been experimenting with a 3d printer and have started producing covers for the antenna and anti-eye-pokers (that’s a highly technical term) for the tips. Here are some pictures of what the new antennas look like:

There are several key reasons that we have decided to adopt this approach:

We’ve just about got the process to where we can “mass produce” (about 30 at a time) the caps and tips, so we’ve started stocking up.  What we haven’t decided is which colors to use.  Here is what we have right now: 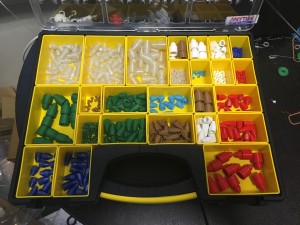 We have ordered some more filaments and hope to add to this:

As you can see, there are a lot of options; we will probably make a bit of everything and see what people like, but it’s hard to have any guarantee that anything will be in stock with so many options.

Which colors should we keep?

Leave a comment please and let us know what colors you think should be “standard”?  Would you pay extra (probably $5 or $10) to have a custom antenna made with a specific color?  What do you think of the change?

Thanks in part to several hams in Utah and Salt Lake counties who assisted, we now have SMA male antennas back in stock.  I have black and yellow in my hand right now, but red and blue antennas will be done in about four hours; not in time to ship today (Jan 1), but does mail run today anyway? =]  They’ll be ready to ship tomorrow, and our stock will build up as we finish applying the final two steps of antenna construction.

For those interested, the final two steps involve sealing the wire into the connector and applying the coat of rubber which gives them the color and nice finish at the end.  Rubber coating the SMA male antennas without getting any inside the connector requires us to use plugs and we have a limited number of those, which slows down the final stage of production.

In the mean time, just know that we’ve been working hard *all year* this year to get the SMA-male antennas back in stock as we’ve had a surprising number of people asking for them.  I’ve also re-enabled backorders, since even if I don’t have any ready when you place the order it will only take a day to get them ready, which isn’t so long to wait in general.

73 and happy New Year to everyone! May your 2016 be full of friendly QSOs and fascinating Amateur Radio equipment. 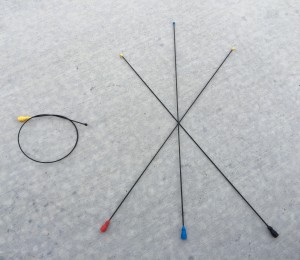